skip to main | skip to sidebar

Vivendi: A Study of the Media Conglomerate’s Mergers and Acquisitions Since 2009

Vivenda SA, a major French conglomerate, has a long history dating back to the mid 1800s. The corporation has proved itself to be a money-making behemoth, employing over 50,000 people worldwide and having a 2010 operating income of approximately $4.8 billion.

After getting authorization from an imperial decree Compagnie Générale des Eaux began in 1853 by a small pool of wealthy investors, including Napoleon III’s half-brother and the Rothschild family. The main purpose of the organization was to supply water to the towns of Lyon, Nantes, and Paris from the French farmlands. By 1976, the company had grown to encompass trash collection, heating networks, waste incineration and construction and its irrigation services accounted for less than 50% of its operating income.

Under the leadership of chairman Guy Dejouany in 1976, the company began a rapid buyout plan. The company purchased Générale de Chauffe, Compagnie Générale d'Entreprises Automobiles and created Société Francaise de Radiotelephonie. Upon Dejouany’s resignation in 1996, Jean-Marie Messler assumed the role of chairman and immediately began to shake things up. One of the biggest events in Vivendi’s history occurred later in 2000 with the three-way merger between Vivendi, Canal+ and Canada’s Seagram. After being cleared by the European Commission, the $34 billion deal created the world’s biggest media group, Vivendi Universal. Vivendi Universal would hold assets in Hollywood film studio Universal, as well as music, telecom and television companies. In 2003, Vivendi Universal announced an agreement for the merger of NBC and Vivendi Universal Entertainment, which would form a new company called NBC Universal. General Electric would own 80% of the company with the remaining 20% belonging to Vivendi Universal. Messier’s strategy as chairman drove Vivendi to the brink of bankruptcy. The rapid expansion was overambitious and brought the company to debt and a down-grade by credit-rating services.

All eyes were on Jean-Bernard Levy at the start of 2009 to see how he would pick the company back up. Left with little decision, Vivendi Universal agreed to sell the remaining 20% stake to General Electric, giving GE total control of the company in 2009, in order to raise some cash. Levy’s strategy was focused on internal/organic growth and investing in high-growth countries and industries.

With the increase of mobile phone owners globally, Vivendi is betting mostly on the telecommunications industry, pumping more money into the industry and taking measures to protect it. In late 2009, the Maroc Telecom, a subsidiary of Vivendi, paid €252 million for a controlling stake in Sotelma, the incumbent telecommunications provider in Mali, beating out the likes of Sudatel and Portugal Telecom in the auction. Sotelma has a stock of an estimated 90,000 fixed lines and 480,000 GSM subscribers and the market is expected to grow in the near future. Next, Vivendi signed an agreement with Swarth Group and Global Village Telecom BV the controlling shareholders of Brazilian telecommunications firm GVT for 100% control of the firm. GVT has become an important contestant in Brazil, quickly becoming the “fastest growing broadband and telecoms player in Brazil.” Vivendi stated it hopes to offer its expertise in the industry to further push GVT to the forefront of progress by helping it enter new market segments such as IPTV. Most recently, at the beginning of April, Vivendi took a three billion euro loan from thirteen banks to acquire Vodafone’s 44% stake in SFR, the mobile telecommunications company it first began in 1987. The move to buy SFR is also important for Vivendi because the mobile and Internet operator is its biggest cash contributor.

Moreover, in light of Levy’s internal growth strategy, there is speculation that Vivendi will reach a deal to increase its stake in CANAL+. Vivendi currently owns 80% of CANAL+, with the remainder belonging to rival Lagardere. Talks were postponed due to the earthquake in Japan but are expected to start again sometime soon. CANAL+ has been praised as the “sharpest player around the table. ” CANAL+ has a dominating market share in pay-TV across Europe and is considering bringing that brand equity into free television. CANAL+ has announced its plans to launch CANAL 20, a free-to-air generalist digital channel. CANAL 20 will offer French productions and films. Vivendi states that this move into free-TV is necessary to combat the potential threat of outside competitors Google TV and Apple TV.

By using Vivendi as a compass, it is possible to forecast that the telecommunications and free-TV industries will be most profitable in the future. Vivendi will continue in its quest to add value to the brand through the help of mergers and acquisitions. The firm will continue to invest in the other industries it has footholds in so as to accomplish organic growth. It will be interesting to where or what Vivendi does next. 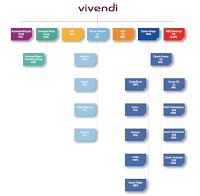 Posted by Students in Paris at 2:32 AM

This blog is an archive of an academic course.

All textual explanations and essays are Ⓒ original materials of RKW or student named in post. This blog claims no credit for any images posted on this site unless otherwise noted. Images that appear on this blog may be copyrighted to owners. If your image appears on this blog and do not wish for it appear here, please E-mail with a link to said image and it will be removed.